Edit
watch 01:36
We're Getting Mutants in the MCU - The Loop
Do you like this video?
Play Sound

Dad's Army is a 1971 film based on the BBC TV sitcom Dad's Army. Directed by Norman Cohen, it was filmed between series three and four and was based upon material from the early episodes of the television series. The film told the story of the Home Guard platoon's formation and their subsequent endeavours at a training exercise.

1940 - Operation Dynamo has just taken place. From the newly conquered French coastline, a Wehrmacht colonel looks out over the English Channel with powerful binoculars. Surveying the white cliffs of Dover, he spies Godfrey emerging from a lavatory. Godfrey joins the rest of his platoon, who are defiantly waving the Union Flag. The colonel fumes contemptuously, "How can the stupid British ever hope to win?!"

One morning, George Mainwaring, the manager of the Walmington-on-Sea branch of Martins Bank and his chief clerk, Wilson, listen to Anthony Eden making a radio broadcast about forming the LDV. [N 1] At the local police station, chaos ensues because there is nobody to organise the enrolment of the men, but Mainwaring takes charge, later commandeering the local church hall to register the volunteers.

The local platoon is eventually formed, with Mainwaring in command as Captain and Wilson as his Sergeant. With no weapons or training, the platoon is initially forced to improvise using home made devices invented by Jones which invariably backfire or malfunction with disastrous consequences - including a anti-aircraft rocket launcher which blows up a farmers' barn and a submarine made from a tin bathtub which throws Walker into the river. The platoon gain uniforms and eventually, weapons. Following Dunkirk, the LDV is renamed the "Home Guard".

The platoon is sent to take part in a war games/training weekend, but after Jones' newly-converted van breaks down, they are towed by a steam roller. Out of control, the roller destroys the platoon's tents, as well as other equipment, angering Major-General Fullard, who is in charge of the weekend exercises.

After a night spent sleeping without tents, the platoon oversleep and are detailed to hold a pontoon bridge during the day's exercise. The bridge has been sabotaged by the Royal Marines, and the results are comically chaotic. Captain Mainwaring is summoned by the Major-General and told that due to the platoon's poor showing, he will recommend Mainwaring be replaced.[N 2]

While the platoon are walking back to Walmington, a Luftwaffe aircraft is shot down and the three crewmen parachute out. They enter Walmington church hall, and hold the mayor, vicar and many people, hostage, demanding a boat back to France. Mainwaring and his men arrive and realise what has happened. By this point, the police and regular military troops have begun to arrive.

Whilst the former dither and discuss what should be done (with the repeated phrase "we'll have to be careful how we handle this"), the platoon infiltrate the building though the church crypt. Dressed in choir surplices, they proceed into the church hall singing "All Things Bright and Beautiful"; as they do so, they surreptitiously replace the regular words of the hymn with directions on overpowering the Germans. Mainwaring pulls a gun from under a collection plate and points it at the leader. They both say they will shoot after a count of three. The platoon pull out rifles and the Germans are forced to surrender. The following day, Mainwaring and his men are the pride of the town. While opening the bank, Wilson reveals that the German pilot's gun was empty, prompting Mainwaring to reveal that his was also empty.

Mainwaring and the Home Guard are seen looking towards France from the cliff tops. The weather has changed for the worse and it seems unlikely that the Germans will invade. Suddenly, Walker hears what appears to be the sound of digging. Thinking the Nazis are attempting to tunnel into Britain, the entire platoon lie down on the ground and listen. However, the 'digging' they hear is actually Pike shuffling his feet!

Differences from the television series[]

The film made a number of significant changes, imposed by Columbia Pictures, such as recasting Liz Fraser as Mavis Pike instead of Janet Davies and filming outdoor scenes in Chalfont St Giles rather than Thetford. Also, the bank was now "Martin's" rather than "Swallow" Bank. In addition, with the increase in budget, the set interiors and the vehicles used were completely different, and the streets of Walmington had extras walking on them. As well as this, the audience saw the Germans preparing across the Channel, rather than simply being an unseen threat. In addition to this, the events of the platoon's formation were revised in various ways for the big screen treatment.

Many of the changes, in particular the recasting of Mrs. Pike, met with criticism. Liz Fraser was chosen because director Norman Cohen wanted a less homely, more "sexy" actress for the role, Jimmy Perry has said "It was a mistake... not to cast Janet [Davies] in the role because the viewing public had come to recognise her as Mrs. Pike. But that was a decision made by Columbia."

Another less notable change, was the vehicle portraying Jones' butcher's van. In the original TV series the van was an open cab style 1935 Thornycroft, whereas an earlier, closed cab Ford Model AA was used in the film.

Filming took place between 10 August and 25 September 1970, at Shepperton Studios and various locations. The film's UK premiere was on 12 March, 1971 at the Columbia Theatre in London. Critical reviews were mixed, but it performed well at the UK box office.

Discussions were held about a possible sequel, to be called Dad's Army and the Secret U-Boat Base, but the project never came to fruition.

The film still often appears on British terrestrial television over the Christmas period. 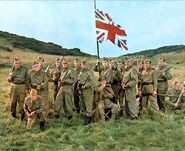 The scene which appeared as the film's title card.

Jones turns up for the enrolment in his old World War I uniform.

The Nazis plan their invasion of England.

Lance-Corporal Jones and Captain Mainwaring in the driving cab of the steam roller.

A specially posed publicity shot, in which Arthur Lowe is wearing his everyday spectacles as opposed to Captain Mainwaring's.

Major-General Fullard and Captain Mainwaring inspect the Walmington-on-Sea platoon. Note that Arthur Lowe is wearing his everyday spectacles in this publicity shot.

Major-General Fullard in uniform on his horse.

Fullard in civilian clothes, while trying to get his cheque cashed.

Jones's van from the film on display at the Bressingham Steam Museum.

The rubbish lorry on display at the Bressingham Steam Museum.