The film is set during 1944, with the end of the Second World War in sight. In Walmington-on-Sea, Captain Mainwaring's Home Guard suffers from a lack of confidence, lack of usefulness and plenty of low motivation. This is until a glamorous journalist, Rose Winters arrives to cover a report on the platoon's exploits and activities, including patroling a base in Devon. All the men are riled up with her presence, especially Captain Mainwaring and Sergeant Wilson, causing a stir with the townsfolk, especially the platoon's wives.

Meanwhile, MI5 have discovered a radio signal transmitted from Walmington towards Berlin, apparently the work of a spy. This gives the Home Guard a chance to make a real presence in the war, so the platoon try to catch the spy. Rose informs the platoon that Sergeant Wilson is the spy. Mainwaring believes her and arrests Wilson.

Meanwhile, Godfrey's sisters have investigative evidence that Rose, who has recorded the information that the base set at Dover is a dummy one for German planes, is the foreign agent among them. The platoon and their army wives rally to stop Winters and they engage in cross-fire with a German U-boat and a bunch of Wehrmacht soldiers helping Winters to escape. The U-boat flees without Winters and Mainwaring hands her over to MI5. The troop then parade through Walmington, having fought off the Nazis and are congratulated by Colonel Theakes. Mainwaring and Wilson explain that they "had their suspicions" about Rose, although they never actually did. Theakes then congratulates them further by telling them that they have played a massive part in the war effort, which they had. 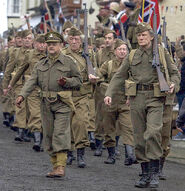