"Do you think I might be excused?" - Charles Godfrey.

Charles Godfrey (pronounced God-free) was a retired shop assistant (Civil Service Stores) from Walmington-on-Sea. He later became a private in, and the medical orderly of the Walmington-on-Sea Home Guard. He was sometimes referred to by his fellow platoon members (particularly Joe Walker) as "Charlie".

He was born in 1871, and is not actually the oldest member of the platoon, with Corporal Jones being 1 year his senior. In the episode, "The Showing Up of Corporal Jones" which is set in 1940, it becomes clear that Godfrey is 69 (he says he is 59 to hide from Major Regan the fact that he is too old for the Home Guard, which mainly only allowed man between the ages of 17 and 65).

Despite this, Godfrey is by far the most frail member of the Platoon who often have to help him in and out of the van, for example. In addition his weak bladder often lets him down and postpones all platoon activity, hence his catchphrase, "Do you think I might be excused?", and his tendency to fall asleep can be similarly categorised; "I must have dozed off!".

At the age of 20 Godfrey met Mrs. Prentice with whom he shared a brief but tender relationship.[1]

During the First World War he was a conscientious objector and served with distinction as a stretcher bearer in the Royal Army Medical Corps, heroically saving several men's lives during the Battle of the Somme, earning him the Military Medal.[2] After the war he brought home a German Stahlhelm (helmet), which he used as a flower pot.[3]

He says he served for 35 years in the Army department of the Civil Service Stores as a tailor but also mentions, working in the Army & Navy stores.[4]

I his retirement (He is the only member of the platoon to have done so) he lives in the picturesque Cherry Tree Cottage with his hard-of-hearing sisters, Dolly and Cissy. When there is any need for provisions, his sister Dolly often provides upside-down cakes. They also have a pet parrot called Percy.

During the Second World War he answered Anthony Eden's call and joined the LDV. Once the unit was properly established he felt that as a pacifist had to resign, a decision that earned the disdain of his comrades. However when his military history was revealed after saving Captain Mainwaring's life he became the platoon's Medical Orderly.[5]

Godfrey is gentle, mild-mannered and kindly—though more complex than is evident—old man. When the revelation of his conscientious objection he is immediately ostracised by the veterans of the platoon. Despite this cruelty he continues to do his best to look after the platoon and when his heroism during the war comes to light he remains humble and does not hold any grudges.[6]

Also in spite of his constant ill health he refuses to give in and (aside from regular bathroom breaks) he is a constant presence at Mainwaring's side.

Mainwaring: "If you're not fit for front line duty Godfrey, you shouldn't come at all"
Godfrey: "I didn't want to disappoint you, sir"
Mainwaring: "Well done Godfrey"
— He is immensely loyal to Captain Mainwaring, who often feels quite guilty whenever he has criticised Godfrey.

Although his sisters lightly chastise him he is clearly very fond of them and often brings them up in conversation. He is also a long-standing friend of Sergeant Wilson, lending him a large sum of money when Mrs Pike is blackmailed by Hodges.[7]

Though he does not like to wear them Private Godfrey is entitled to at least the following medals.

Assuming he stayed with the platoon until it was disbanded, his 3 years of Home Guard service would also make him eligible for the Defence Medal, worn after his British War Medal. 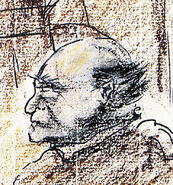