Dad's Army Wiki
Register
Don't have an account?
Sign In
Advertisement
in: Characters, Home Guard, Citizens of Walmington-on-Sea,
and 2 more 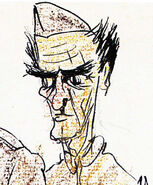