Dad's Army Wiki
Register
Don't have an account?
Sign In
Advertisement
in: Characters, Main Characters, Citizens of Walmington-on-Sea,
and 3 more

"The Honourable" Arthur Wilson was the head clerk of Swallow Bank in Walmington-On-Sea. He later became the Sergeant of the Walmington-on-Sea Home Guard Platoon. He was portrayed in the BBC television sitcom Dad's Army by John Le Mesurier.

Arthur Wilson was born in 1887, two years after his senior in the bank and the Home Guard, George Mainwaring. He has an upper-middle-class background; his father had a career in the City of London, and Wilson often recalls fond memories of his nanny. He was educated at a public school named Meadow Bridge. He is chief cashier of Walmington-on-Sea bank, and captain of the cricket club.

Captain Mainwaring compared Wilson with Peter Pan because he could never face responsibilities. These included Private Frank Pike, who worships his "Uncle Arthur" but may be Wilson's son—Wilson has a relationship with Mavis Pike, Frank's mother. It is gossip in Walmington-on-Sea, as both arrived in there from Weston-super-Mare around the same time, and there are other 'coincidences' that show Wilson and Mrs Pike are more than "just close friends". It is assumed their affair began many years ago. It is revealed in Getting the Bird that Wilson is married but that his wife left him. He has a daughter from his marriage.

Tension and comedy between Wilson and Mainwaring is caused by their difference in social class; Wilson had an upper-middle class childhood and public school education, prompting resentment from the lower-class Mainwaring who had to work his way up and views Wilson as having it easy. Mainwaring frequently reiterates his superior rank in the bank and the military to maintain authority and superiority over Wilson. Wilson undermines his superior through casual charm and frequent concern at Mainwaring's plans, querying "Do you really think that's wise, sir?" The contrasts are established in several ways; as a civilian, Mainwaring wears a bowler hat while Wilson wears a more fashionable Anthony Eden hat. In The Honourable Man, Wilson became "The Honourable Arthur Wilson" after an uncle, a peer, died, making him a member of the aristocracy. Mainwaring tried to stay the centre of attention; Wilson detested his elevation in social rank and the pressures it forced on him, which only infuriated Mainwaring more, as he believed one should revel in titles of nobility rather than be ashamed of them.

Conflict between the two reached a head in A. Wilson (Manager)?, in which Wilson is promoted to a manager of another branch and also to Second Lieutenant in a neighbouring Home Guard Unit. Wilson finds that his promotion would have happened long ago but for Mainwaring's telling his superiors he was not up to it. Mainwaring's resentment of Wilson's breeding is revealed. Wilson's new branch is bombed, so he has to return to Walmington. His sign "Arthur Wilson, Manager" is among the debris. Wilson's first concern is whether he can keep his rank (Second Lieutenant). "Of course", replies Mainwaring, and throws him the sergeant's stripes.

Wilson thinks Mainwaring a pompous fool but they remained friends. Wilson provides a more realistic and down-to-earth appraisal of a situation than Mainwaring, who is blinded by pomposity and patriotism; as demonstrated in this exchange:

Mainwaring: I could have sworn they'd never break through the Maginot Line.
Wilson: They didn't ... They went round the side.
Mainwaring: That's a typical shabby Nazi trick!

However, when pushed a different Wilson emerges. In High Finance, it emerges during an enquiry that Warden Hodges has been forcing his attentions on Mrs Pike by blackmailing her with a rent hike; Wilson reacts by punching Hodges in the face, to the adoration of Mrs Pike and Frank. He is the only member of the platoon to be physically violent, as in Absent Friends when Pike, Jones, Fraiser, Walker and Mainwaring attempt to subdue three IRA members and are beaten off. Wilson defeats them singlehandedly with only bruised knuckles to show for it.

In the final episode, Wilson turned up at the wedding of Jones and Mrs Fox in a captain's uniform, having achieved the rank of Captain in World War I. He was modest about it (in the first episode Wilson claims to have been a Sergeant in the Royal Artillery) and Mainwaring was pleasantly, surprised—although he insisted that "it doesn't change anything, you know". (Ironically in World War II, John Le Mesurier who played Wilson had been a Captain, while Arthur Lowe who played Mainwaring had been a Sergeant Major).

Wilson is carefree, cheerful, well-spoken although more complex than first seems. He has a mysterious aura, a vague and dreamy personality. He is a kind man, who goes with the flow of life. Wilson's dream-like state leads to mimicry by the platoon, mostly Walker and Frazer, but he remains liked by those under him, and is admired by many (usually Jones, Godfrey, and most of all Pike). Rather than bark orders per he asks "would you mind awfully falling in please?"

Wilson is seen wearing his ribbon bars in the episodes Battle of the Giants! and Never Too Old. He had previously been awarded them as a Captain in the First World War. They are as follows:

Assuming he stayed with the platoon until it was disbanded, his 3 years of Home Guard service would also make him eligible for the Defence Medal, worn after his Allied Victory Medal. 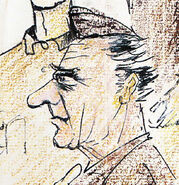