After seeing a Czech Regiment with a large ram for a mascot Captain Mainwaring decides that the Walmington-on-Sea Home Guard should get their own mascot, after a number of suggestions the platoon settles on one of Private Sponge's Rams, however they fail to catch it, along with Private Pike getting temporarily stuck in a bog. 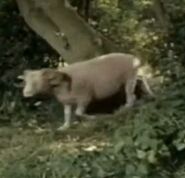 the platoon chasing the ram
Add a photo to this gallery
Retrieved from "https://dadsarmy.fandom.com/wiki/Sponge%27s_Ram?oldid=9299"
Community content is available under CC-BY-SA unless otherwise noted.