Dad's Army Wiki
Register
Don't have an account?
Sign In
Advertisement
in: Characters, Citizens of Walmington-on-Sea, ARP,
and 3 more

"Put that light out!"
―William Hodges

Hodges fought in the Great War, where he learned to speak German as a prison guard[1] and developed a dislike of Americans.[2]

It is revealed that Hodges is uncle to a Scots boy named Hamish who calls him "Uncle Willie".[3]

Hodges is Captain Mainwaring's main rival in Walmington-on-Sea. A greengrocer, following outbreak of war he has been given power as chief air-raid warden, signified by his white helmet, and that power has gone to his head. He can be as pompous and officious as Mainwaring, but is more uncouth and coarse, antagonising the Home Guard platoon, in particular Mainwaring, whom he calls "Napoleon". Mainwaring responds by referring to him as a "tradesman". This rivalry increased after he was forced to share the church hall with Mainwaring after his headquarters was bombed.

When Hodges and a warden believe they have caught Mainwaring with a light in his office one night (a violation of the blackout and a criminal offence). Hodges greets the discovery with the joyful words "I've got him" repeated over and over in near-hysterical manner. He and Captain Square, the greater of Mainwaring's enemies, proceed to see that the trial goes downhill from the start, Hodges telling Mainwaring he hopes "they give you a month". However, their attempts to have Mainwaring prosecuted are thwarted by Private Walker, who reminds Square of his own black-market whisky.[4]

After a near-death experience with an unexploded bomb, Hodges agrees a truce with Mainwaring and orders his ARP wardens to help the Home Guard gather in the harvest. Hodges is suddenly desperate to have Mainwaring's favour, and continually insists what a 'good man' the captain is, to the amusement of the platoon. However after they both become drunk on potato wine, the rivalry returns with Hodges branding Mainwaring "a drunken old snob".[5]

Hodges is immensely arrogant, shown mainly in his scenes with the Home Guard. Also, he gleefully blackmails people just so he can get what he wants.

Hodges views the Home Guard as ineffective old men and tries to take charge of important situations as an 'ARP matter'—however, as he also displays a cowardly streak. When a situation presents any real danger he is quick to transfer command back to Mainwaring and withdraw such as when a large unexploded bomb landed on Swallow Bank.[6] He and his co-conspirator, the verger, often try to sabotage the platoon's efforts, usually at the command of Captain Square.[7][8][9][10][11] His feelings towards both Mainwaring and his wartime responsibilities were summed up when Mainwaring is stuck up the town hall clock tower:

Hodges: "I hope you stay up there to let me enjoy this war in peace. Because I do enjoy this war. I've never enjoyed anything as much in all my life... And you! You always spoil it."[12]

Hodges is also disliked by the rest of the platoon, who whistle the theme to Laurel and Hardy when he appears. A number have a personal reason for their contempt. Wilson dislikes Hodges because of his advances on Mrs Pike (this led to Wilson punching Hodges in the face [13]). Godfrey also dislikes him because of his attitude towards the elderly. after Hodges tells Mr. Blewett to shut up, the usually calm Godfrey tells Hodges he is a "rude, common and nasty fellow"[12] and also calls him "the most vulgar, rude and common man I (he) have (has) ever encountered".[14]

Even Walker, who is seen doing business with Hodges at several points, threatens to give Hodges "a bunch of fives up the hooter" after one insult too many towards the platoon.[15] Pike, who is usually not confrontational, encourages Mainwaring to shoot Hodges on a flimsy excuse ("You shoot 'im, Mr Mainwaring"). He is also greatly disliked by the town in general. While he was aware of the platoon's hatred for him, he was shocked into tears when informed he was hated by townspeople, though in several episodes Mainwaring and Hodges do grudgingly accept that they are fighting for the same cause. In several episodes, Hodges refers to having "funny turns", which hints that his mental faculties are less than perfect. However, there are hidden talents, for example being a fine cricketer,[16][7] or speaking fluent German.[1]

According to the novelisation of the feature film of the series, Hodges also bears a grudge against Mainwaring because the latter, as manager of the bank, had found it necessary to reject Hodges' application for a loan, which had been requested for construction of a new storeroom. Mainwaring had suspected that the storeroom would have been used to hoard goods which were in short supply, in direct contravention of wartime regulations.

Hodges also featured in the spin-off radio series It Sticks Out Half A Mile, though his Christian name had changed to 'Bert'. 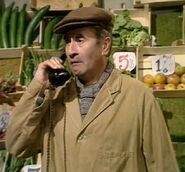 Hodges in his Greengrocer uniform

Hodges's uniform in Never Too Old